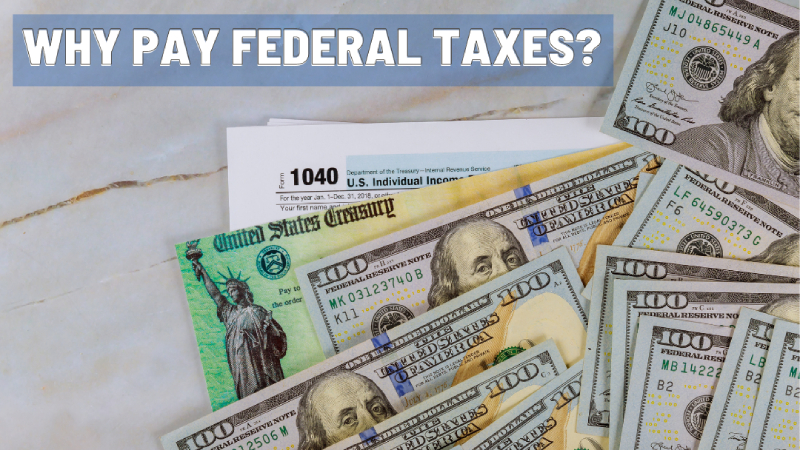 What a fantastical dream — to pay no taxes.

Now … would it surprise you if I said most American households (including many Palmdale households) enjoyed that very dream in 2020 because they ended up not paying federal taxes – not a single dime?

Last year’s insanely rocky economy and subsequent federal relief efforts led to “an extraordinary increase” in the number of U.S. households that owed absolutely no federal individual income tax in 2020.

The Tax Policy Center of the Urban Institute & Brookings Institution estimates that almost 107 million households, or about 61%, owed no income tax – or even received tax credits from the government. That percentage is up a lot from just the year before.

But all that aside … would you be even further surprised to learn that not paying federal taxes could actually be a bad thing?

The Case Against Palmdale Residents Not Paying Federal Taxes
“Even if you’re on the right track, you’ll get run over if you just sit there.”  – Will Rogers

The share of non-payers is expected to drop to around 102 million households this year, or about 57%. The Policy Center projects that the percentage will return to pre-pandemic levels in 2022 (about 75 million households) and continue to decline after that, “assuming the economy continues to rebound and several temporary tax benefits expire as scheduled.”

How did so many people, including some Palmdale residents, end up not paying federal taxes last year? For one, 20 million workers lost their jobs last year, many of them low-wage employees who were paying very little income tax before the pandemic.

Three rounds of federal economic stimulus checks (aka Economic Impact Payments, or EIPs) were also refundable tax credits, meaning they significantly reduced tax liability in both 2020 and 2021. The expanded Child Tax Credit, Earned Income Tax Credit, and the Child and Dependent Care Tax Credit were also refundable. The payments, said the Policy Center, “flipped some households from paying income tax to not doing so.”

And this year, in effect, slightly less than half of American middle-income households will end up not paying federal taxes. And that’s expected to fall to about one in five households over the next few years.

The share of Americans who pay no federal income taxes has been hovering around 44% for most of the last decade, according to the Policy Center.

Lucky them? Maybe. Maybe not.

For starters, nobody completely escapes taxes. Income tax is just one tax (though it seems like the most direct one) we pay. There are also the obvious sales taxes and then the less-than-obvious taxes baked invisibly into purchase prices (like the taxes for a gallon of gas).

The Policy Center estimates that while the number of households paying neither payroll nor income taxes also rose significantly, roughly four out of five did pay one of these two taxes. (“Payroll taxes” usually show up on paychecks under “FICA” — Federal Insurance Contributions Act).

Also, nearly everyone in the country paid state and local sales taxes, excise taxes, property taxes, and/or state income taxes, among others.

Many who went from paying some federal income tax to paying none might’ve experienced only a small reduction in taxes – in other words, they didn’t pay much income tax to begin with because their income was so low. As unemployment drops, that’s unlikely to continue. And, 2020’s increases in refundable credits are also set to expire at the end of this year.

In short, conditions that produced the pay no taxes dream aren’t going to continue – and people should stop depending on their continuance.

Best to pay as you go

Now, for the other taxpayers, the *not paying* federal taxes will most likely catch up with you. For one, it can give you an inflated sense of income – not to mention the IRS generally expects you’ll have paid most of your total tax bill prior to filing your return.

So, here’s how to keep ahead on your tax bill:

The way we arrive at fallacies like “the rich pay no income tax” is that we don’t think about the “rich” having smart people on their team who know the tax code inside and out — and who know how to leverage it proactively (not just reactively, i.e. simple return preparation). These “people” are professionally trained to find fully legal and ethical ways to arrange for income and cash flow to be taxed at lower rates than other kinds of income.

And believe me — this isn’t something done through simple software, A.I., etc — but rather alongside actual humans who’ll listen to you and help you make decisions according to your goals. And… save you on your taxes as you do.

And the very good news? That’s exactly who’s in YOUR corner.

So, for a look at your personal financial situation, and how we can help you make the right, tax-advantaged moves NOW … we’re right here:

Stay safe out there,